FREE SHIPPING FOR USA ORDERS OVER $50

Specialty tea is leafy grade tea produced with the intention to enhance and fully express the characteristics present in the leaf. Specialty tea celebrates the unique diversity of flavours, growing regions, climates, production methods and preparation as a means to create optimum end user enjoyment. It tends toward a more artisan approach to manufacture than mass-production. Commodity tea In contrast is purchased as a homogeneous product, the objective of the production is to maximize yields and consistency, to reduce costs for an acceptable standard of quality. Convenience and efficiency re typically favored in preference to the preservation of leaf characteristics and celebration of seasonal variation. 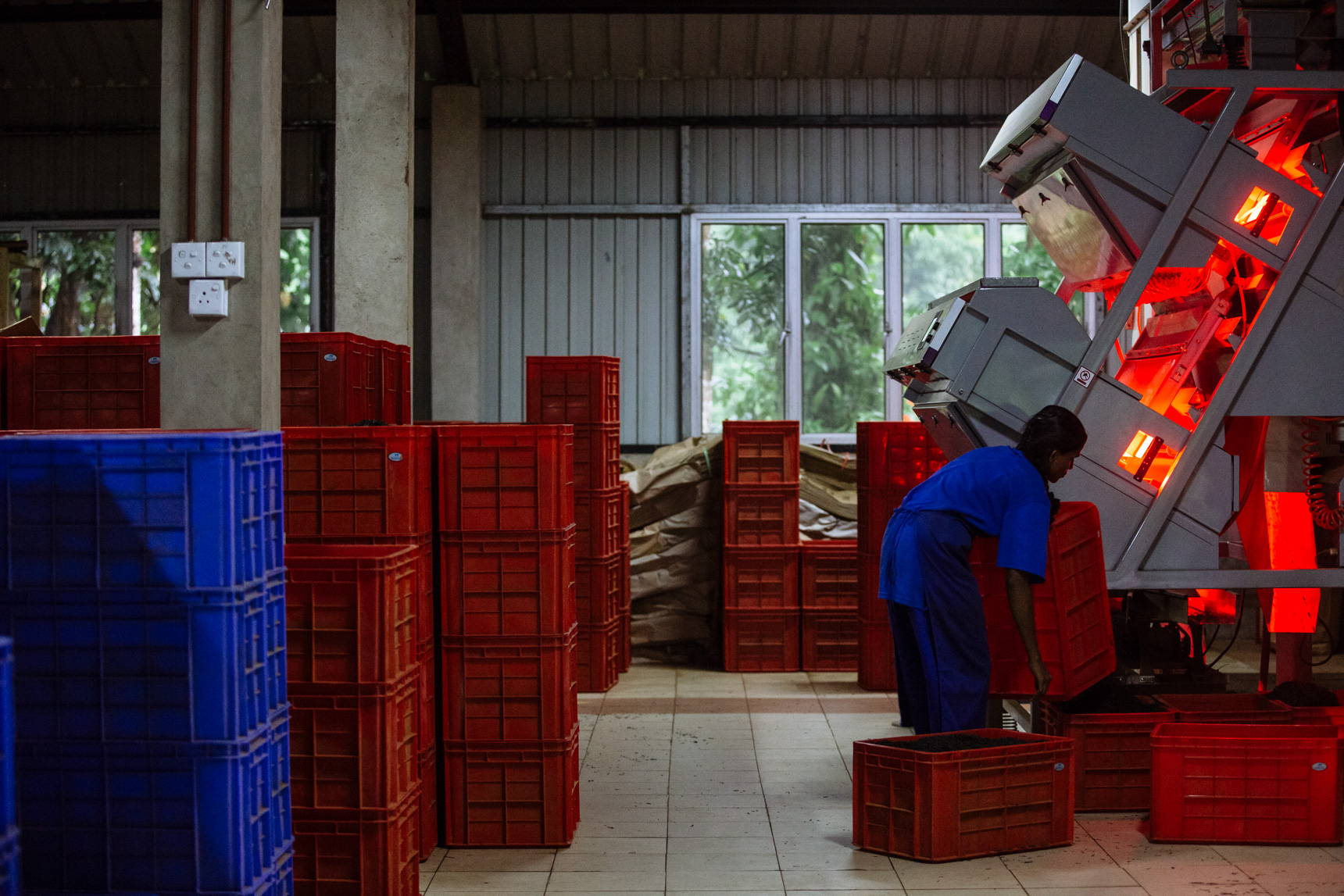 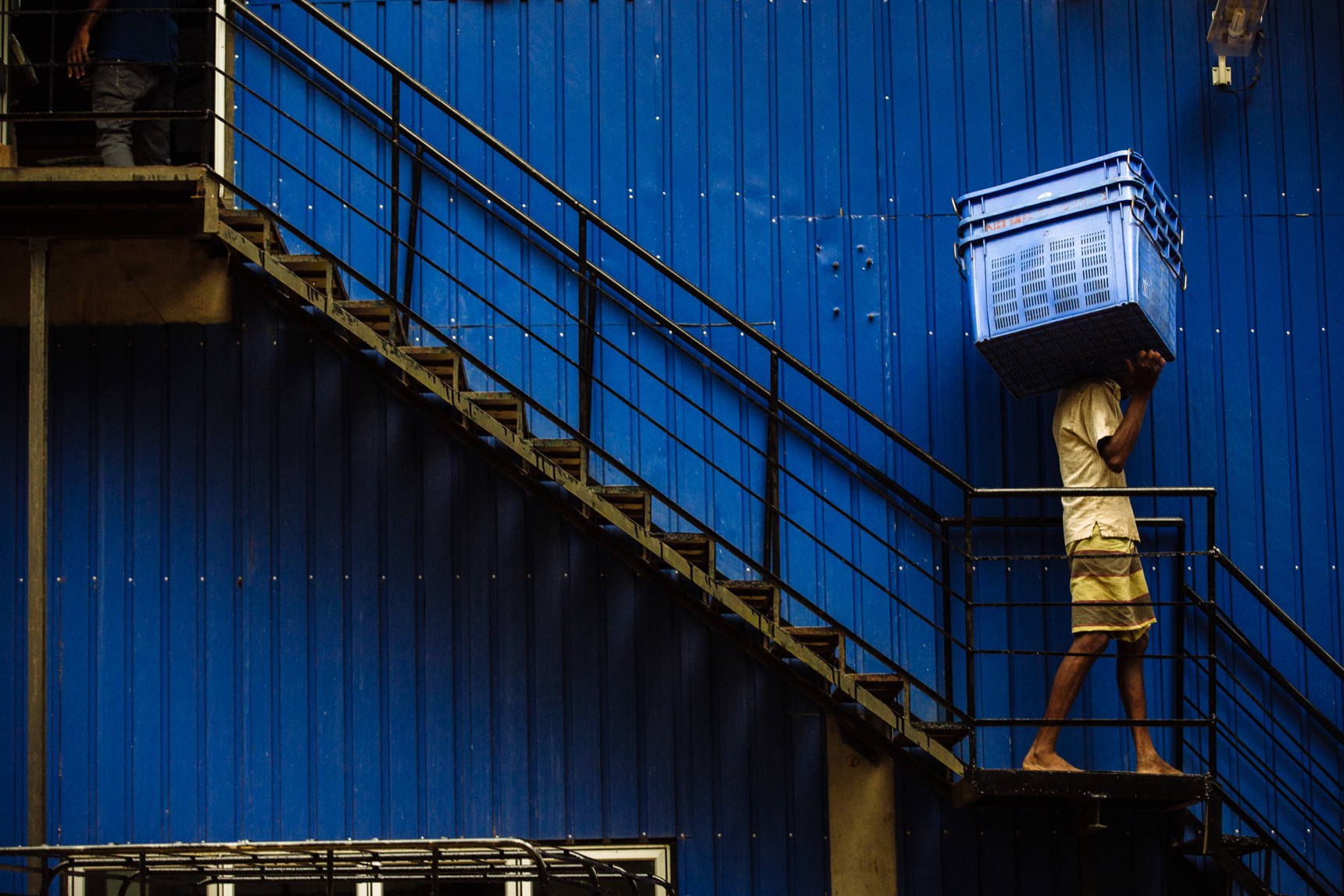 Tea Picking typically takes place 3 times per year around a ‘flush’. A Flush simply refers to the new germination of leaves on the tea bush that occurs after a period of dormancy. The first flush is also referred to as the spring flush, which commences with the change in environmental conditions associated with the change in seasons. Some countries like Sri Lanka are able to produce tea year round, but have peak flavour seasons due to specific favourable climatic conditions occurring at the time.

The fresh new leaves of each flush offer the most complex aroma and flavoursome taste. If the leaves are not harvested in time and reached full maturity, the unpicked leaves become increasingly dull and bitter. Continued exposure of tea to sunlight converts polyphenols in the leaves into bitter catechins. If the tea plants are shaded for several days in the field, the accumulation of catechins decreases in newly developing tea shoots (increasing the savoury (umami) character of the tea. This is why in Japan, tea bushes are often covered with shade cloth to block sunlight for the last 20+ days.

The age (or generation) of the tealeaf in each flush will affect the flavour. The immature leaves and buds (which have light flavour and are high in polyphenols) are picked for white tea. 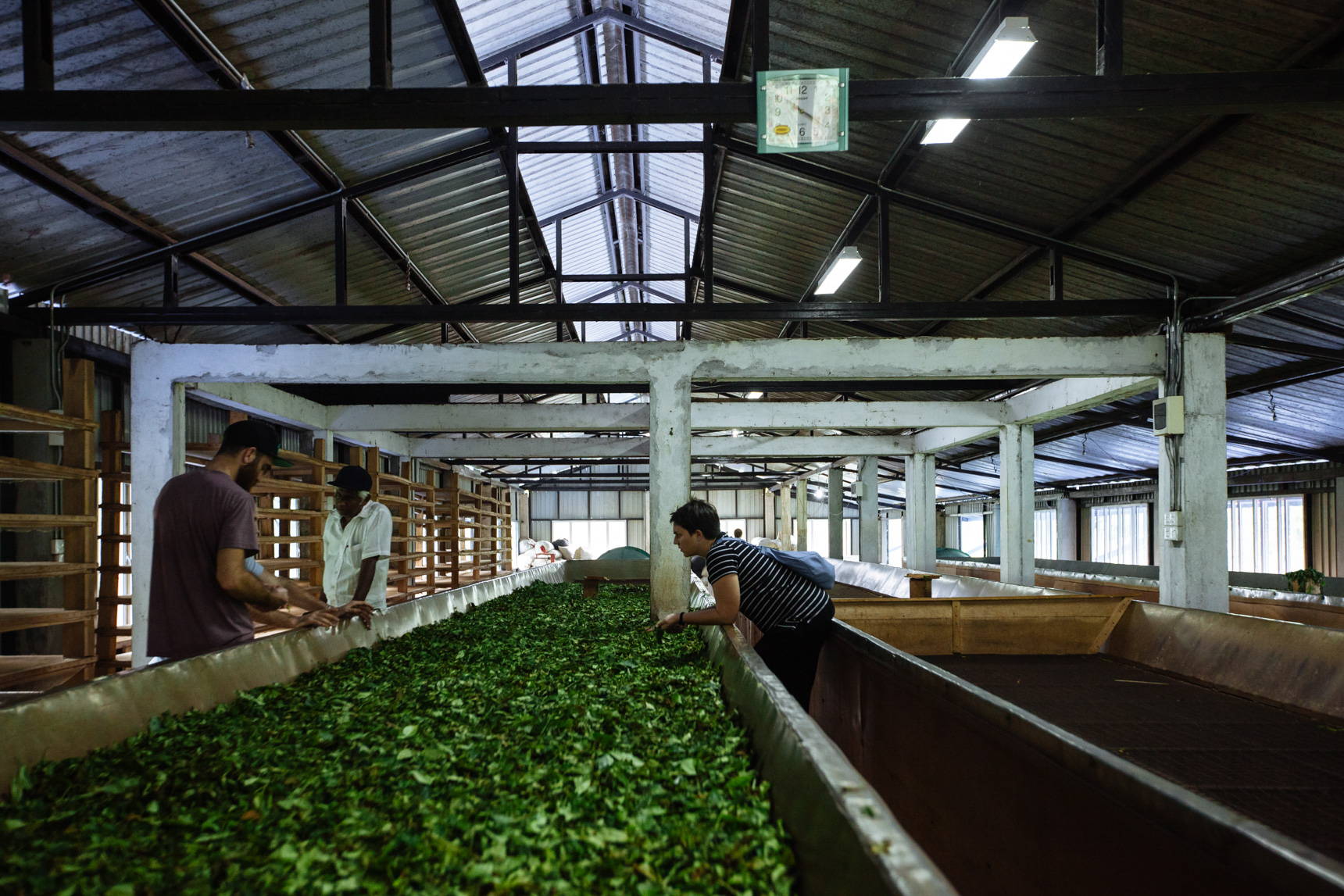 The more mature leaves are picked for green and black tea. During picking, pickers will typically pick 2 leaves and a bud as these leaves tend to provide the right balance of flavour and complexity as well as offer sufficient yield to be commercially viable.

There is also a temptation for the pickers to pick more course /mature leaf as often pickers are paid on volume, but in general, where quality standards are enforced, a better result is obtained than with machine harvested tea. Aside from picking for a particular style of tea (e.g. Maofeng is 1 leaf 1 bud), it is a good general rule of thumb to pick from the tea bush only that part of the leaf that the bush is willing to give easily. Using a blade to pluck leaf not offered easily by the bush typically results in a course leaf and dull flavour.

With hand picked tea, experienced pickers will only pick the fully developed and flavoursome leaf. With machine-harvested tea, all of the leaves are clipped from the tops of the bushes causing less flavoursome tea (bitter or dull leaves and immature leaves) being added into the mix. There are post harvest methods used to refine the tea that may help to remove fibre and damaged leaf, however the highest quality teas are almost always handpicked. 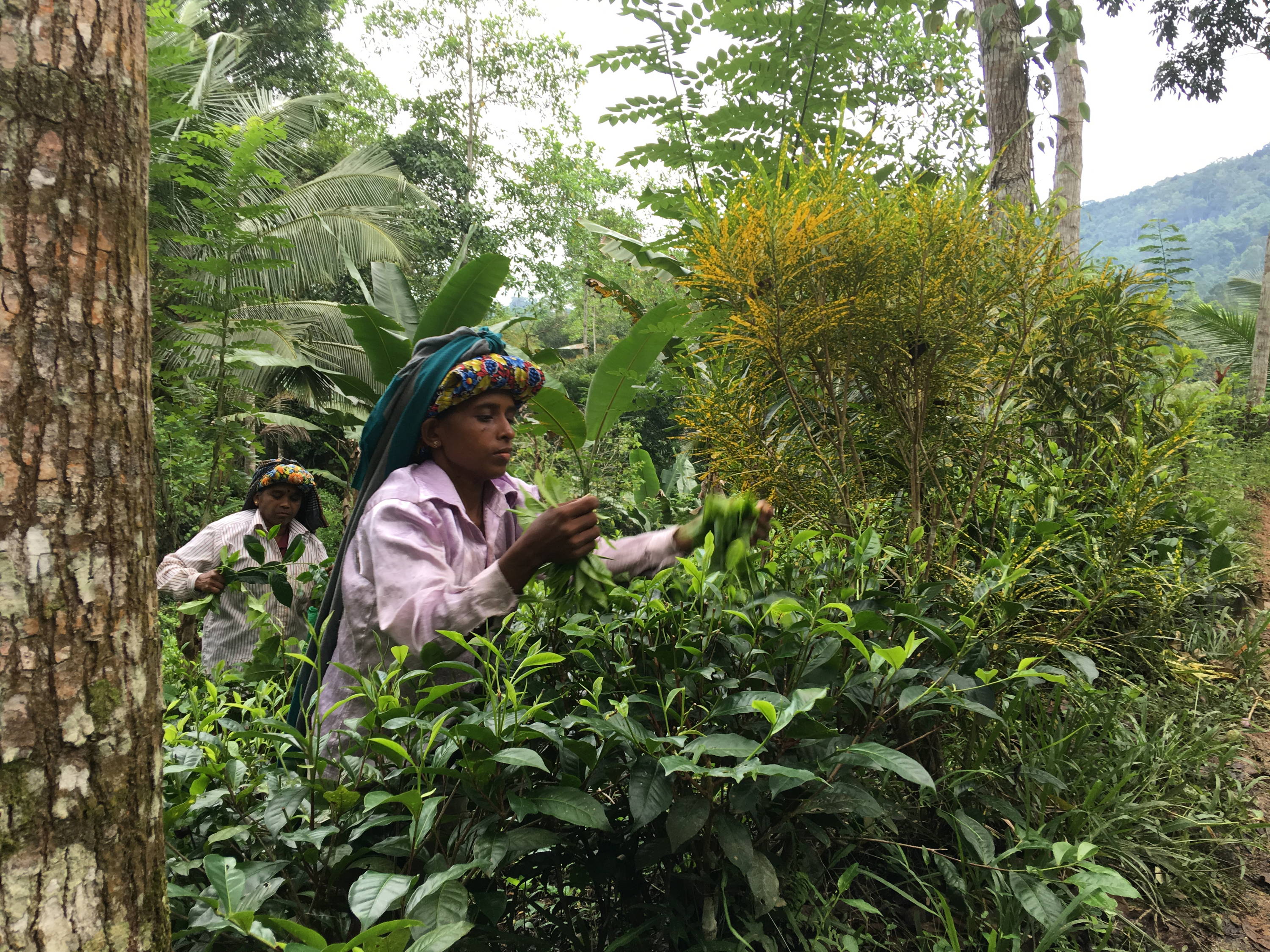 Withering is the first mechanized stage of tea production once it reaches the factory. The picked leaves are laid out in long wooden or concrete troughs with a mesh screen at the base that allows air to pass though. A large fan is located at one end of the trough, which blows air from underneath the leaves through the mesh. Over a period of around 9-16 hours (depending on the humidity and temperature of the environment), the leaf will begin to reduce in moisture content from approximately 74 and 83% moisture content at the time of picking (the leaf at this stage is very stiff and waxy) to 68 to 70% moisture content when at the end of withering (Here the leaf will be softer and more pliable). For best quality, an air temperature of a steady 25-30°C is ideal, beyond 35°C the quality falls as leaf is overheated.

During withering, the moisture content in the leaf is reduced by about one-third to one-half, making the leaf flaccid and pliable. This prepares the leaf for further processing, usually shaping and rolling. On the chemical side of things during withering, chlorophyll in the leaf begins to degrade, caffeine levels slowly rise,, flavor and aroma volatiles develop in the leaves and grassy aromas dissipate. Since the leaves are cut off from their supply of energy, they also begin to break down their stored carbohydrates for use as energy. The loss of moisture also causes the cell walls to break down, initiating polyphenol oxidase and peroxidase activity – the reaction known as oxidation. The longer the wither, the more aroma and flavor compounds develop in the leaves. This is because during the withering process, many of the chemical compounds in the leaves degrade into volatile compounds. In fact, many tea makers use their sense of smell to tell when the withering process is complete. If the leaves are withered too long, polyphenol and peroxidase activity will cease due to dehydration. Once withering is deemed complete, processing continues.

At certain times, such in the advent of rain near the time of harvest, it might be necessary to remove the excess moisture form the leaves using hot air during withering. Accelerated withering in this way is generally not desirable, as this process evaporates some of the desirable volatile taste and flavor components in the leaf, which results in less character expressed in the tea.

As the moisture is removed, the leaf will continue to become softer and eventually become quite easy to bruise, so care is taken during this process not to handle the leaf too often. Generally the leaves are turned 2 to 3 times to ensure even withering of all of the leaf in the withering trough. The colour in the leaf begins to change as the green Chlorophyll begins to degrade. The softening of the cells that occurs during withering also supports a uniform distribution of polyphenol oxidases which will later be used to oxidise the leaf during the oxidization process.

It is possible to under-wither or over-wither the leaf; both will have a negative impact on the character and flavor of the made tea. If the tea is under withered then the leaf will remain staff and there will be insufficient friction to adequately roll the leaf that will in turn result in poor oxidization. If the tea is over-withered, there will be a large percentage of dust and flavor and character may be lost. Well-withered tea allows for effective rolling, with a lot of the leaf being ruptured or twisted allowing for the release of the tea liquor form the vascular bundles contained within the leaf. 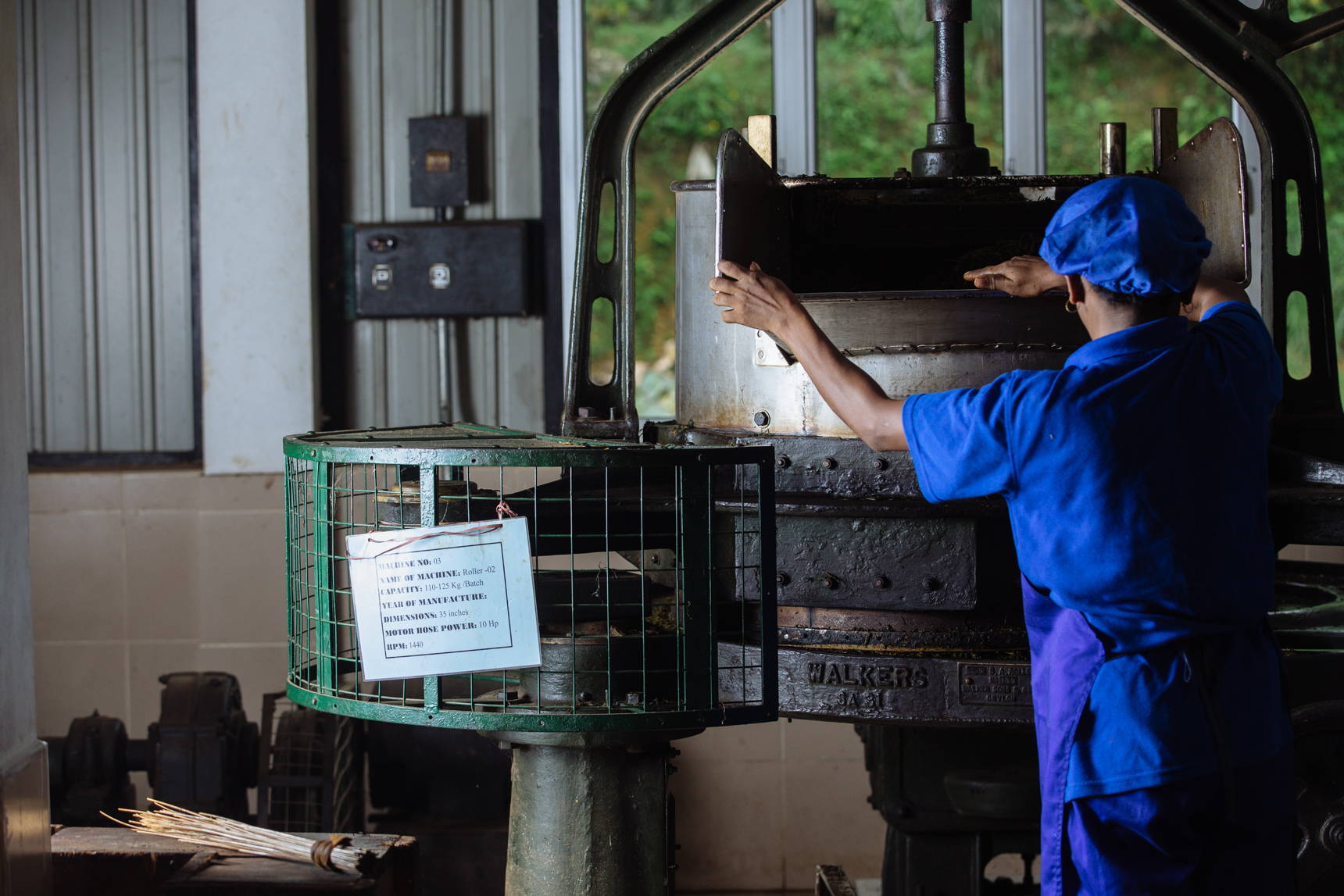 The next stage of production after withering is rolling. During the rolling process the leaves are dropped into the rolling machines that rupture the cell structure of the leaf and break the leaf down into smaller fragments.

Tea that cannot be properly rolled will often be cut up with a rotovane for use poorer quality tea bags. In this way the manufacturer is able to increase their yields and lower the average production cost of the tea.

Tea that has been properly withered and rolled when dried will be described as being wiry and well twisted, this effect is caused when the cells of the leaves are broken across the full length of leaf. Well-rolled tea supports a more complete oxidization, resulting in more character and flavor in the made tea. 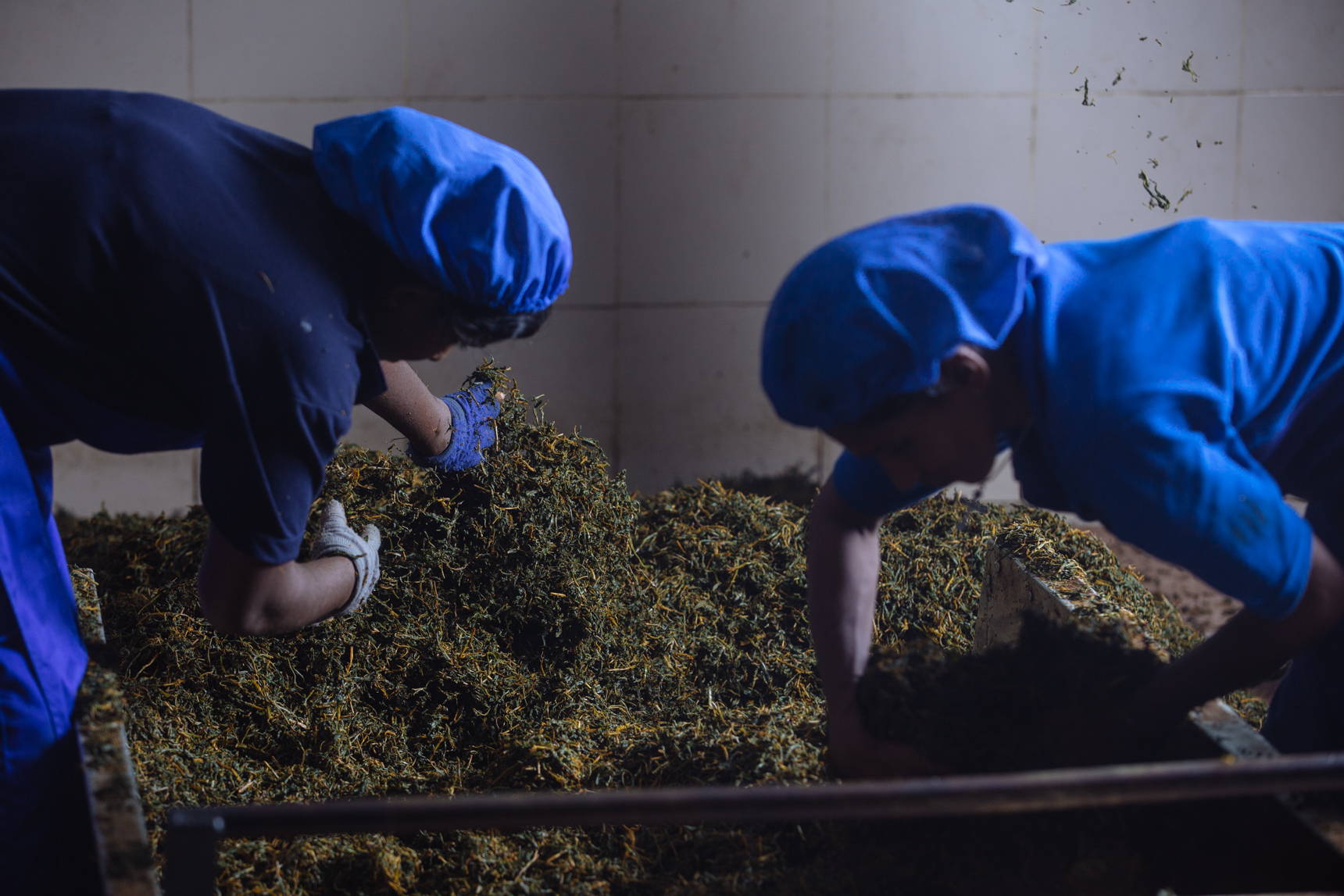 The process of oxidisation develops flavour in the tea, depending on the level of oxidisation different flavour characteristics will be obtained. Heavy oxidised teas tend to be stronger and more bitter with a darker colour infusion as more of the sugars and the structure of the leaves break down through the extended activity of the enzymes.

To make green tea, the fresh green leaves must be prevented from oxidising – Typically the tea maker will use steam (common in Japan) or a hot pan (common in China), to neutralise the enzymes and prevent the oxidisation from taking place.

Else, to make black tea, by rupturing the cell structure of the tea leaves during rolling, the substrates (polyphenols) and enzymes (polyphenol oxidases) contained within the fresh green tea leaf are released and combined, and as a result, enzymatic oxidative reactions begin the process of oxidisation.

During oxidisation, biochemical and chemical reactions (strecker degradation reactions) occur when atmospheric oxygen and polyphenol oxidases combine to form oxidized polyphenolic compounds that create volatile aromas characteristic to the taste of tea. The oxidisation of amino acids, carotenoids, and unsaturated fatty acids by oxidised phenols leads to the development of the aromas. Also, during oxidisation, flavanols are oxidised enzymatically in to compounds (theaflavins and thearubigins) which are responsible for the flavour and colour of black tea. Phenolic Compounds make up 25-35% of the dry leaf, of which 80% are flavonoids.

The period of oxidisation varies according to the type of tea being made and the desire of the tea maker. In Sri Lanka it is common to oxidise tea for a period of 1 hour and 50 minutes to 2.5 hours (I have seen much longer oxidisation in China).